We are happy to share Ultimaker 4.8 Beta with you. It marks a new step in the evolution of Ultimaker and perhaps the world’s most used slicer. You can help to make it even better for yourself and all its users by taking part in this Beta and report your findings back with us.

So, what new features can we share with you today? 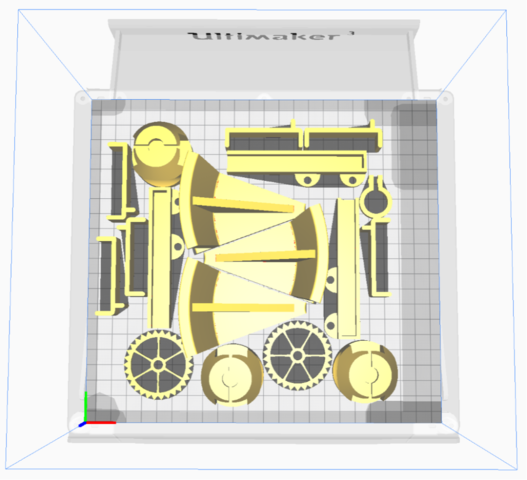 And we shouldn’t neglect to mention that this feature was developed with the power of the open-source community. A big thank you to Prusa Research, who developed the open-source library used to creature the feature’s improvement.

The cool side of the build plate.
Ultimaker Cura will now show your model, or part of your model in a different color when it reaches below your build plate. This should help in creating a more visual guide which part of a model will be cut off and therefore not printed.

Loading project files.
When you load a new project file, you can now select with which printer type you want to open this project. You can still choose to open it with the printer type it was originally sliced for, but you have the option to select a different printer type too.

Previously, when changing percentages, the wrong axis would be scaled, resulting in a broken model. This has been fixed.

Fixed an issue that left tiny artifacts in certain curves, causing the print head to slow down. This results in smoother print surfaces when printing such curves.

Curious to give Ultimaker Cura 4.8 Beta a try? You can download it here.
Please share your findings with us below. Together we can make things better!

New arrange algorithm!
Shoutout to Prusa, since they made the libnest2d library for this, and allowed a licence change.

When opening a project file, pick any matching printer in addition to just exact match and new definition.
Previously, when someone sent you a project, you either had to have the exact same printer under the exact same name, or create an entirely new instance. Now, in the open project dialog, you can specify any printer that has a(n exactly) matching printer-type.

Allow scrolling through setting-tooltips, useful for some plugins.
Certain plugins, such as the very useful Settings Guide, occasionally have very large tooltips. This update allows you to scroll through those.